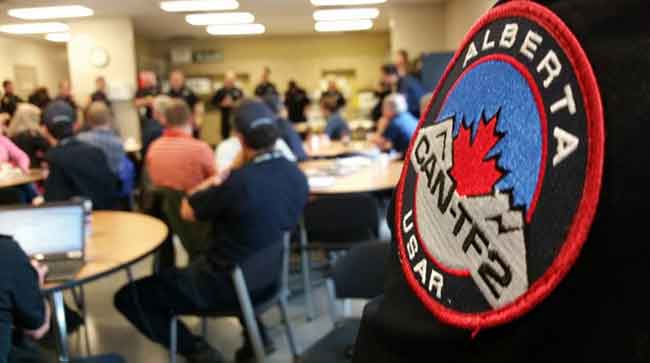 A. Deployment comes through the provincial emergency operations centre (POC), and they make the request to the Calgary Emergency Management Agency (CEMA).

We started with an advance team. Six members went as an incident management team, to figure out what other support needed to follow.

Over a three- week period, we sent three deployments totaling 180 members, including 22 members from Canada Task Force 4 (from Manitoba). The team consisted of everything from, logistics support and chefs to an incident management team (IMT) and a medical unit. The final deployment returned May 21.

Q. What was CAN-TF2’s role in Fort McMurray?

A. Canada Task Force 2’s role in any disaster response is to support the local community and ensure the local authority succeeds.  When we arrived in Fort McMurray CAN-TF2’s initial role was to provide logistics and support to the incident management team.  The team reported to REOC Fire Hall 5 in Fort Mac and started to meet with the local authority and evaluate any of the positions that needed assistance.

Q. How did your members integrate into the REOC?

Our members filled roles in the incident command team– we had an EOC manager, a deputy, logistics, safety, liaison – as well as many other positions. Many roles were staffed with a member of the local authority and propped up with Can-TF2 members.

Q. Originally CAN-TF2 and the other teams specialized in heavy urban search and rescue, yet you deploy to wildfires. What has changed?

A. When the Joint Emergency Preparedness Program funding ended in 2012, we lost our federal funding. Since then we have shifted to an all-hazards disaster response team to expand our capabilities and expand membership.  The team now consists of IMT members, logistics, engineers, communications, building inspectors, rope rescue, canine support.  This allowed us to have an all-hazards team that could provide more expertise and co-ordination for the province.

A.  Absolutely there’s certainly always going to be challenges in responding to a disaster, but the local authority in Fort Mac is amazing; they appreciated our help and assistance and our feedback, and were phenomenal to work with.

We learned the value of relationships and it was reinforced for us yet again, the importance of being dynamic and flexible to certain situations, and to really morph what our team structure looked like in response to what the local authority needed; we go in and figure out how to best help them so we learned importance of that flexibility.

Q. What was your role in Fort McMurray?

A. I was up there in kind of an interesting role; I went up the second week, working with the EOC manager and deputy manager to provide the link back to Calgary and provide oversight for the team.  I was working to support the transition between the local authority and Can-TF2 to ensure the local authority’s needs were met while CAN-TF2 started to demobilize resources.

Q. How is the team structured?

A. The team comprises volunteers from all over Alberta.  Team members need to reside within a four-hour radius of Calgary. This allows the team to have a wide breadth of knowledge and skills, from engineers and police to experts in mapping and GIS, medical doctors.

For this deployment there were 180 people deployed to take part in the various roles: 58 per cent were from Calgary and the immediate area; 28 per cent from remainder of Alberta; and 12 per cent from Can-TF4.

When the team first came into existence it really was focused on the heavy urban search and rescue and was mostly firefighters but we’ve really broadened and are able to do that all-hazards focus.

Funding is a combination right now, by the Alberta Emergency Management Agency and the City of Calgary. Of course the federal government has re-announced funding for this year, so we’re crossing our fingers.

Our first full deployment was for the Slave Lake fires in 2011, and then components [of the team were deployed] in 2013 to support floods in High River and in Calgary, and in 2014 after the September snowstorm that Calgary experienced.

We’ll continue to morph into that all-hazards approach and be able to handle a variety of incidents. There is an incredible wildfire group in Alberta – were not going to become a wildfire-specific team. There was a whole lot of value brought by the team during the flooding in 2013 and the 2011 wildfire – our value is really in the ability to adapt and respond to a variety of events.

Q. Will there be a post-mortem or review of the deployment?

A. We always have a post-mortem to ensure we capture lessons learned, identify any gaps in process and determine future training opportunities.  CAN-TF2 is part of the Calgary Emergency Management Agency.  We continue to be activated [as of May 31] supporting the response because a number of evacuees who are here. Once that’s over we’ll start looking at [a post-mortem] in a number of areas.

Q. What stands out most from your experience in Fort McMurray?

A. I think most of what we’re talking about is the relationship side and getting to know the people around you – meet your utilities workers, meet your wildfire firefighters. You don’t want to be meeting for the fist time at the event.