On Tuesday, May 3, we had heard that things in Fort McMurray were getting bad: people were being evacuated and the threat to the city was huge. In the afternoon, I had been talking with one of my captains with the High River Fire Department, Brent McGregor. McGregor had been a training officer in Fort McMurray before moving to High River Fire, and he was concerned about the city and the guys up there as this had been his home for a number of years. 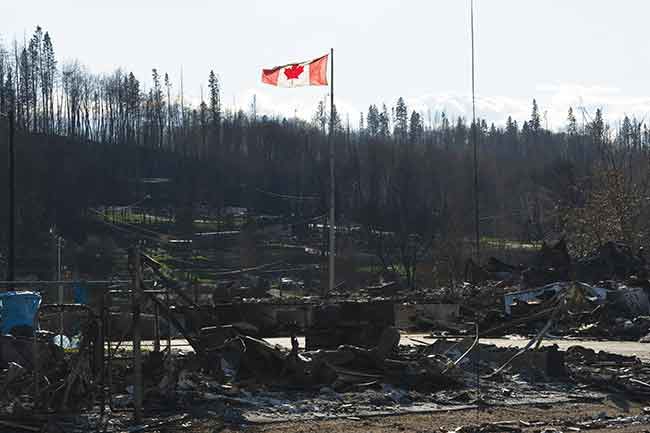 McGregor was talking with the chief about High River Fire going up to help, and he said that High River Fire had been added by the Provincial Operations Centre (PEOC) to the list of resources that were willing to be deployed. I had also called my chief from the Foothills Fire Department about getting us on the list; at that point Chief Jim Smith said he had talked to the PEOC and we had been added.

That night was our regular training in High River and the guys were continually checking social media and other news outlets to watch the situation unfold. All the High River Fire members were anxious to go to aid in this desperate time; we all felt we needed to be there to help as it was our chance to give back for the unwavering support we received in 2013.

We knew what our bothers and sisters to the north were going though. In 2013 our town was evacuated and a good portion of it was under water. A lot of our members lost their homes, me included; we understood what the responders in Fort Mac were experiencing and the extreme workload ahead. Seeing the news reports and social media posts brought back waves of emotions – not so much that we were going to be directly affected by the fire, but for the people of Fort McMurray and the emergency-services personnel. It is a very helpless feeling – watching something over which you have very little control start to take over your community, damage property and destroy memories. For us in the emergency services, our communities are more than places we live; they are places we are here to protect and serve for our customers, the citizens.

On Wednesday night, May 4, at 18:00, the PEOC called and we were deployed to Fort McMurray. Within minutes, six members from High River Fire were at the station preparing for the 10-hour trip. Within an hour of being notified we were on the road heading north. During this time I was making arrangements with members at my full-time station (Foothills Fire, Heritage Pointe Station) to cover my upcoming shifts; the guys were unreal and without a question they stepped up and my shifts were covered for my next tour. Even though my full-time department was never deployed to Fort McMurray, members did help by allowing me to have the time off and covering my shifts.

I was very honoured to be selected to head to Fort McMurray with the crew; this was an opportunity for me to pay back all of the support and assistance that my community and fire departments (High River and Foothills) received in 2013. After the flood, I looked back and thought, “How can we ever repay all these people, most of whom I had never met before?”

As we approached Fort McMurray, the smoke became heavy on Highway 63 and we could see where the fire had burned along the highway and where it continued to burn; it was surreal and the guys in the truck became quiet. At around 05:00 on May 5 we pulled into the staging area at MacDonald Island; Deputy Chief Trevor Allan and Capt. McGregor went to check in with the staging manager. Shortly after arriving we were deployed into the Timberlea area, along with firefighters from Cold Lake and Shell Albain Sands, and a Bronto from the Fort McMurray Fire Department. Multiple homes were on fire and homes across the street were becoming exposure fires. We worked alongside these departments for a few hours to contain the fire and keep it from spreading to other homes.

That day we were deployed to multiple areas of Fort McMurray, doing everything from building fires to wildfires. Driving around the city and seeing the deserted street brought me back to the floods. We had the opportunity during the first day to work with multiple departments from all over Alberta. During the 24 hours we returned to the staging area multiple times to be reassigned and to load up on drinking water and snack foods that were laid out in one of the indoor fields; this was our food for the first day we were deployed. The crew I was with worked until 05:00 the following day with no complaints and, as a collective, we all said we were there to work and help out in any way that we could. After getting to MacDonald Island we found a spot on the floor in the Mac Island rec centre, in one of the children’s indoor play areas, to lay out our sleeping bags and catch a few hours of sleep. Finding a place to sleep was difficult as there were firefighters sleeping on floors and cots and in hallways – wherever they could find a spot.

When we woke up the crew headed out to our truck, did a quick once over to make sure we were ready for the day, then lined up back in staging to be redeployed. The second day we were sent to different areas of the city to take care of flare ups and spot fires in the trees as well as patrol the downtown area; the fire had burned along the ridge to the east side of the city and there was a concern that it may jump the river. That evening we headed to the Noralta Lodge north of the city where we were able to have a hot shower and a bed for the night. On the way to the lodge the smoke was very heavy, which made driving a bit of a challenge.

In the morning we headed back into the city to the staging area, where we were then deployed to Saprae Creek. We met up with the Saprae Creek area command and spent the day working around homes (about 11 kilometres east of Fort McMurray) to knock down hot spots and spot fires. Later in the evening we headed back to the Saprae Creek fire hall where a retired RCMP member cooked a steak dinner for the crews; this was the first sit-down, hot meal we had. After leaving Saprae Creek we headed back to staging. Shortly after getting back we were sent to a fire along Highway 63 near Highway 881; we worked to extinguish a fire in the ditch area and then headed down Highway 881 where City of Leduc firefighters were working on a fire in the valley that was threatening some building and fuel storage. We worked alongside Leduc firefighters for the night. After finishing up on Highway 881 we headed back to Mac Island to get some sleep. As we were walking down the hallway in the rec centre, a security guard stopped to talk and asked us if we had a place to sleep for the night because he knew of an empty room we could use. He took us down to a small classroom and helped us set up a few cots. I don’t think that we could thank him enough for helping us out that night!

The following days we worked around Fort McMurray in different areas on hot spots and spot fires, cleaning up garbage around the staging area along with a crew from Edmonton Fire and unloading semi trailers full of water and supplies. After a long Day 1 – we had not had lunch or supper – we were hungry and tired after arriving in staging; a large semi had arrived and some firefighters from Parkland County were working to unload the supplies. My whole crew jumped in and helped them out to get the job done. Meanwhile a smoking BBQ was 15 feet away with a hot meal cooking.

On Day 4 our relief crew arrived and we did the hand-over to them.

During our time in Fort McMurray we were able to meet with and talk to some of the FMFD members. You could see how tired these folks were, but they were not stopping and still giving it their all. These members did an outstanding job saving the majority of the city and keeping everyone safe. Some of them had lost their homes to the fire, but that was not their concern at the time; their concern was stopping the fire from damaging any more of their city. It was good to talk with them and tell them that right now things are bad, but it does get better with every day that goes by; we in High River learned this and, at the time, it’s very hard to believe things will get better, but they do.

During floods and fires it is truly amazing to see how departments across the province can come together and work alongside each other to help mitigate a massive disaster. A lot of connections were made that will never be forgotten and the camaraderie that all the crews showed was inspiring. Some of the unsung heroes who were very essential to the operations were the water-tender truck drivers who were following the fire trucks to provide us with much needed water where there were no hydrants. These folks worked alongside us, pulling hose, helping in any way they could. Bikers for Veterans and the other people working in the rec centre worked hard to make sure guys had dry socks, making coffee, and finding other supplies to help keep the fire crews going. Bikers for Veterans also had a small barbecue set up and were cooking whatever they could find; these people worked tirelessly for days to make sure the emergency service crews all got something to eat and were taken care of.

Being in Fort McMurray has once again opened my eyes to the fact you never know when a disaster will strike and that we should be prepared. I never would have thought that I would see another disaster of this magnitude in my life but this was the second in three years. I hurt for the people of Fort McMurray who have lost everything, and the people who still have homes but don’t know what they are going to be walking into once they get back.

I was very proud to be with my HRFD family; they were a hard-working, non-stop crew and our two officers made every effort to ensure the safety of our crew. I heard it multiple times from my officers as well as the Fort McMurray officers: “Everyone goes home once this is all over.”

Cody Zebedee is a part-time firefighter with the High River Fire Department and a full-time captain with Foothills Fire Department’s Heritage Pointe Station.