Co-operation crucial to knock down

There is a fine line between being at the tipping point and going over. Firefighters in North Vancouver recently found themselves on the line. The first of many 911 calls came in shortly before 05:00 on Monday, July 18.

Built in 1971, 357 East 2nd Street is a wood-frame building with 29 suites on three floors; there are no sprinklers or standpipe, however the fire alarm was upgraded in 2014 and is monitored by a central station. While the building is three storeys at the front, the land drops away to the rear, where the building is five stories high. Lane access to the rear is from the east side only, extending to the parking lot entrance. The rest of the Charlie and Delta sides are city park, with mature trees growing close to the building. Access to the rear is made more challenging by the presence of hydro lines and transformers.

City of North Van Chief Dan Pastilli and Assistant Chief Bob Poole were paged out with the initial dispatch as the on-call chief officers. Pastilli quickly realized from the  radio traffic that this was the real deal. Granger had established command upon arrival and he remained as incident commander throughout, with Pastilli assisting him and Poole taking the Charlie side in the lane. The District of North Van Duty chief was the safety officer.

RCMP officers on patrol had seen the flames and were working through the lower floors of the building, alerting residents and assisting with the evacuation. Third-floor residents were reporting by phone that they were trapped by heat and smoke. First-arriving firefighters laddered the upper balconies on the street side of the building to remove residents, while flames were pouring out of one suite at the rear of the third floor.  Capt. Kit Little of District E6 and another firefighter attempted to reach residents at the rear of the third floor from an interior stairwell, but upon cracking open the door on the third floor, were driven back by extreme heat. Hydro wires precluded the use of an aerial. A 35-foot ground ladder barely reached the top-floor balcony where an 88-year old woman was trapped by flames. The first firefighter was unable to get high enough on the ladder to safely grab the woman. The six-foot, four-inch Little waved the firefighter down the ladder. Discarding his SCBA and helmet to minimize his weight and maximize his balance, Little still had to balance on the second rung from the top, as four Mounties on the ground steadied the ladder; he was able to stretch out enough to grab the woman and bring her out over the railing and then get down the ladder far enough to pass her off to firefighters on the balcony below. Not done, he went back up the ladder and scooped her little dog to safety.

By this time, BC Hydro had arrived and de-energized the lines at the rear of the building.  While the City’s Ladder 10 and West Van’s Tower 1 poured water down from the street side, in the rear District Engine 6 unleashed its deck gun in tandem with Quint 5’s 55-foot ladder pipe.

In an interview later, Chief Pistilli described “a very labour-intensive fire” with manpower the key to fighting the fire. Pistilli credits Granger’s quick decision to call the second alarm with getting that manpower in play as soon as possible. The first alarm assignment with three engines and an aerial put 14 firefighters at the scene initially, with the second alarm of two engines, a quint and a rescue from the District along with West Van’s tower adding another 17 personnel on scene in short order. “Enough resources,” said Chief Pistilli, “to allow suppression and rescue operations at the same time.”

While the building didn’t have sprinklers or standpipes it did have a firewall that cut the building in half, from east to west. The fire had started on the top floor in the rear on the east side.  A two-and-a-half was run in the front door and two inch-and-a-halves were run off in a garden lay to support for interior operations. A team from the District was able to access the third floor from the west side through a fire door and gained a foothold; then it was a matter of doggedly tearing down ceilings. “It was knocked down in about two and a half hours,” said Pistilli, “and we were at a comfortable spot after about four hours.”

Manpower was a consideration as the shift change approached. The decision was made to hold over the City night shift of 10 firefighters as the day shift arrived. With the District holding over some of its firefighters, more than 40 personnel were working on the site. Coverage for the City and District of North Vancouver was left to Engine 4 from the District of North Vancouver and West Vancouver’s four engine companies.

Nightshift firefighters were released starting from about 11:00. “It was their first night shift and we had to give them time to rest before coming back to work that night,” said Pistillli. The decision to hold over the night shift was  based on the time; earlier in the shift, it would have required an overtime callback to build up the required personnel.

There was one fatality in the fire. Later in the day, as firefighters were working through the suite in which the fire started, a badly burned body was discovered. Information provided to firefighters at the time of their arrival had been that the resident of the suite was out of town.  Preliminary investigation suggests that the door to the fire suite may have been opened, accounting for the rapid buildup of smoke and heat through the east half of the third floor, which in turn forced residents to their balconies. Again, Chief Pistilli points out, there were a number of residents who heard the fire alarm, but chose to ignore it. Many who delayed had to be rescued. The firewall not only saved the building, but also saved lives. The upper floors of the Charlie and Delta sides of the west half of the building would have been beyond the reach of ground ladders, and rescuers would have been hindered by trees. The roof design worked in firefighters’ favour: the closed construction prevented the horizontal extension of fire.

The fire could have been catastrophic, but several factors worked to prevent that: the firewall was critically important; the role of the RCMP officers in alerting and evacuating residents; the decision to quickly call a second alarm was enabled simultaneous suppression and rescue operations; the decision to hold over the night shift, building up resources and then being able to sustain a concentrated effort to track extensions and hot spots. It’s the little things that keep you from going over the edge. 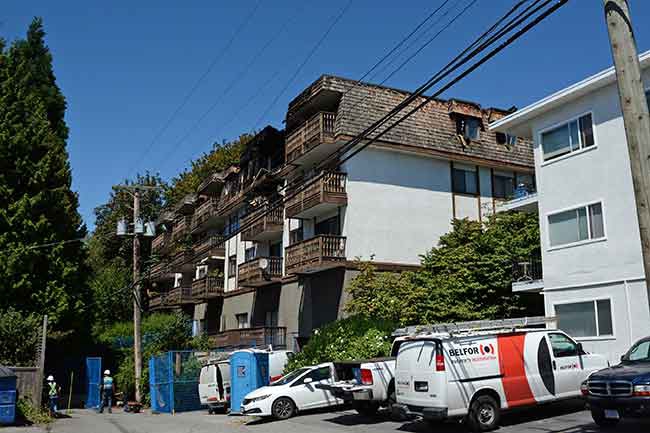 Firefighters from the City of North Vancouver It takes quick-thinking and co-operation to rescue residents trapped in an obstructed apartment building.
Print this page