The observations and decisions don’t stop with the initial size-up and our observation skills as officers should always be on. 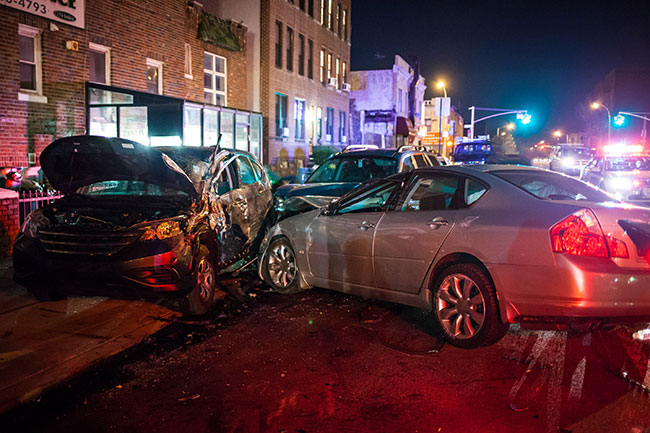 There are dangers we expect to find at a collision, such as leaking fluids. Other dangers, such as toxic illicit drugs found in the car, are some of the subtler dangers to consider. Photo: Adobestock/By PhotoSpirit

A good situation report (sit-rep) from the first arriving apparatus officer can set the tone for how well a scene plays out. It is not the deciding factor for the outcome of a situation, but it is the starting point for incoming units to hear what the big picture looks like and what the first-in officer’s game plan is. The observations and decisions don’t stop with the initial size-up and our observation skills as officers should be always on.

We need to make sure we are keeping an eye on the dangers that we can encounter and physically hurt our crew or ourselves. It can be a challenge entering a scene because the events can often be fast paced and changing and the warning signs of danger can be subtle and not be visually obvious.

When we as firefighters talk about dangers, we think about fire behaviour events such as flashover and backdraft, collapse hazards and even explosions. Showing up to a vehicle collision we can be thinking about airbag dangers, leaking fuels and car fires as the associated dangers.

I have seen these dangers at structure fires and a crew member has said to me, “Hey Cap, I hear the roof cracking.” That is more than a strong tell-tale sign that we need to get a message to everyone that we need to change up our strategy and move out of the structure immediately.  Depending on your operating procedures or guidelines this can be broadcast as emergency or urgent radio traffic.

Within a minute or so, that roof was down on the ground and the structure was compromised. That crew member took what they heard and what they saw and let their team know. In turn it only took a few moments to order everyone out and take up an exterior defensive attack position. The information came in, they processed it and communicated it, avoiding a disastrous scenario. But what about the subtler dangers we encounter?

Our crew got called out to a three-vehicle motor vehicle collision recently. This was one of these scenes that really showed me that I need to make sure I am mentally processing what I am observing and making sure the entire crew is kept up-to-date with the information found. The police and ambulance had arrived just as we did and I was the second officer on the scene. At this point we had the road blocked and patient care was assumed, so we needed to take a look for any fluids leaking and make the vehicles somewhat safe for transporting. On my way up to the first damaged vehicle that was in the ditch, I noticed the police were talking with someone who was in the care of the paramedics. Not an uncommon situation, as the police were more than likely trying to figure out what had happened to cause the collision.

After getting an assignment from the first-in officer, we were tasked with ensuring one of the vehicles was disabled and prepped for the tow operators. With a badly damaged front end, airbag deployment and some leaking fluids, I decided to open up the hood via the latch lever in the passenger compartment. After I found the hood lever a police constable appeared on the passenger side and warned me of a substance in tin foil that was scattered on the center console. The officer had found some suspected narcotics and warned me about the fentanyl content they were finding at the current time and to mind the surfaces I was touching. As the officer continued to search he then said the word “gun”, and as I looked over he picked up a black handgun off of the floor board of the vehicle and showed it to his partners. Just like that, an already intense scene just ramped up a notch.

It turns out the driver of this vehicle was a suspect in connection with several robberies that had occurred in a county next to ours. My lesson that day was in order for me to a be a better captain and officer to my crews, I need to be a better observer of items a scene, both big and small.

Jason Clark has been a volunteer firefighter in southwestern Ontario since 2007. Having  made the transition from firefighter to captain, Jason shares perspective on roles in the fire service and riding in the front seat. Contact Jason at jaceclark71@gmail.com or  @jacejclark.