On the leading edge of auto extrication. 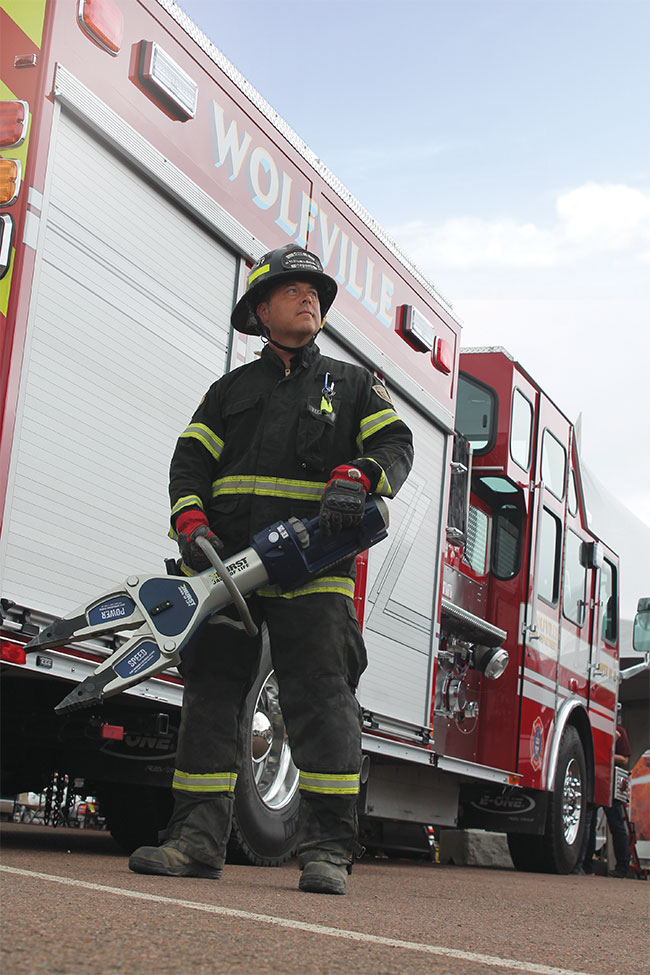 Jason Defosse’s adventures in life have taken him from life as a soldier, to a firefighter, to an auto-ex ambassador with Code 4, and the journey has seen him travel far and wide. Photo: Jayson Koblun

Jason Defosse’s travel itinerary reads a little like the romping rendition of I’ve Been Everywhere by Johnny Cash: “I’ve been everywhere man/Crossed the desert’s bare, man/I’ve breathed the mountain air, man/Of travel I’ve a’had my share, man.” Except in this song, Cash is hitchhiking, and as an extrication instructor for Code 4, Defosse is definitely in the driver’s seat. His talent for auto-ex has taken him up the ranks, all the way to a dream gig as an instructor at FDIC.

When I caught up with Defosse (in his car), he was heading to Windsor, Ont., on the heels of time spent in Newfoundland and Halifax. Home is Trenton, Ont., under an hour from where he was born in Cobourg in 1974. His childhood and school years were spent in the Rice Lake area being raised predominantly by his grandmother.

“I was pretty poor, quite honestly,” he said. “And then my grandma stepped in. She was already older and retired at that point and decided to take on a 12-year-old-kid. I think my goal from there was always to make her proud.”

His goals were clear early on. He has a letter he wrote in 1981 that was returned to him by his primary school teacher two years ago in a circuitous turn of events. The young scribe wrote he would like to be a firefighter and help people who are hurt.

As it happened, he first joined the Canadian Armed Forces as an infantry soldier in 1992 and his life went on the frontlines of the military rather than the fire service. He spent five years in the army and eventually settled in Trenton in 2004, where he became a volunteer firefighter with Quinte West and has been ever since.

His early ambitions back at the fore, he pursued a career as a full-time firefighter. But it wasn’t to be for unfortunate reasons he could not change. A rocket launcher incident during his time in the military destroyed his left ear, eardrum and all. He didn’t tell people about it, having learned to make do with the disability. In the end, after doing all he thought he could to become a full-time firefighter, he couldn’t pass the required medical.

“I can sincerely tell you that when you’re so close to achieving what you want to do, but you can’t because of an injury that was out of your control — you’re serving your country and something crappy like that happens — it is what it is. You can’t cry over spilled milk.”

The dissapointment was a defining turn of events. The “extrication bug” hit him around 2006 and he started to gravitate heavily towards it. As a volunteer on the scene of car accidents with Quinte West, he said it was the skill set he was most confident in. Word of his talents got around, and he was hired by auto-ex specialists Code 4 Fire & Rescue in 2011 to provide training, service and sales.

“All I did was train every night because I didn’t know how to sell, but I sure knew how to train. That’s how it started. And then it kind of took on a life of its own — where I became an instructor and teach — and then people trusted me. Departments that had didn’t have our equipment still hired me. I’ve trained tens of thousands of people in my tender with Code 4… Been all over with them. It’s been a really amazing process, and plus my boss, Chris [Christie], gave me the platform to do whatever I want to do. He’s like a father to me— great, great fella.”

His commitment to teaching got the attention of FDIC International, and he was asked to instruct in 2018. The job was a dream fulfilled; first established when he went to FDIC in 2010 and was amazed by the sheer immensity, the hundreds of people and cars.

“This was the Super Bowl for instructors,” he says. “I wanted an opportunity to be a part of this, but I didn’t know how to do it. I didn’t know how to get there. And s, I just kept doing what I was doing here in Canada, going from Kenora to Cape Breton and training every night and thousands of people every year. And then I finally got a call.”

In addition to FDIC as a career highlight (one he continues as a returning instructor in 2020), he has brought his skills to events held by the Ontario Association of Fire Chiefs, Canadian Volunteer Fire Chiefs and Fire Service Women Ontario. He has a social media presence and preceding reputation that bolstered his spotlight and brought plenty of other cool projects into play. He is a spokesperson for Waymo, formerly recognized as the Google self-driving car project, and worked closely in the making of their instructional video of recommended techniques for first responders, which he is also instructing in. Autonomous cars will only further evolve, he said, and the video is a very important step to training because first responders will encounter these cars and be thrown off by the missing driver and altered seating paradigm. There is a lot of novelty around autonomous cars, a ride he experienced firsthand.

“I’ve been involved in it and seen it and experienced it. The first five minutes are extremely exciting. But then, after that, it’s just like being driven around by your dad, you know? It’s kind of boring.”

He expresses confidence in the technology and part of his role with Waymo is educating on how their autonomous vehicles work. The cars operate on a geo-fence platform to create a virtual perimeter and use a multitude of sensors like thermal imaging that blossom its navigational awareness well beyond that of humans, whom he noted are inherently bad drivers that make poor decisions on the road and are prone to distraction.

With so many advances in technology happening, he said education is what’s at the cutting edge of extrication.

“All the tools are good, regardless of brands, they are all good. They all meet standards. It’s education. It’s teaching people. The car technology and body structures have changed. New cars do not cut, they fracture and break. So, some of these cuts that we make, there’s a lot of reaction to that and we need to prepare people for this.”

Modern vehicles have new types of safety systems, and there are different protocols for approaching vehicles that are fully electric versus diesel or other type of gas. The approaches are different, but all must meet the same end goal of patient safety, he said.

“Let every action that you do result in space for your patient and your medic, and you can never go wrong, regardless of the vehicle that you’re working on. That’s kind of my style and how that works — and it works.” Rescue tools have become bigger and more powerful than ever before to meet the demands of today’s rescues, he said. Thus, when the vehicle and tool technology changes, the techniques that are taught must change alongside them. It is the evolution and application of technology that has put him in the demand he is in, he said.

Perhaps it is not just a need for education that has put Defosse in demand. Perhaps it is also his particular package of experience, personality and passion. He is fervent about sharing what he has learned and crediting the people who taught him. Brotherhood is important to him, something he found both in the military and as a volunteer firefighter, and something he seems to continue to find working so closely with the audiences he teaches. He describes himself as a transparent guy and thrives in the relationships he builds on the many miles he travels, a journey that has afforded him friends here, there and everywhere. He yearns to, and does, make a positive difference as a teacher. He is currently working on a free app to simplify training because he said, “I’m a pay-it-forward kind of guy and karma has been good to me.”

He’s also a big believer in the concept that you “bring about what you think about.”

At heart, Defosse is a man brimming with gratitude. He is quick to be thankful for the friendship and guidance of John Whelan, fire chief for the city of Quinte West and captains David McCue and Keith Locklin, also of Quinte West, and his boss at Code 4, Chris Christie.

The perpetual teacher, he has two children, Trevor and Julia, and he coaches their sports. He said he is also indebted to his children for their patience in light of the many miles he logs on the road.

But wherever he turns up next, chances are someone will be helped. His primary school letter, returned to him all these years later with his own desire to make a difference written by his childhood hand, shows us how early internal motivators can be set and then drive us on this journey of life.

Related
Proper protocol
Extrication tips: What can we cut?
Understanding autism
Back to basics: The four causes of disorientation