Firefighters need tools to deliver care to people with autism. 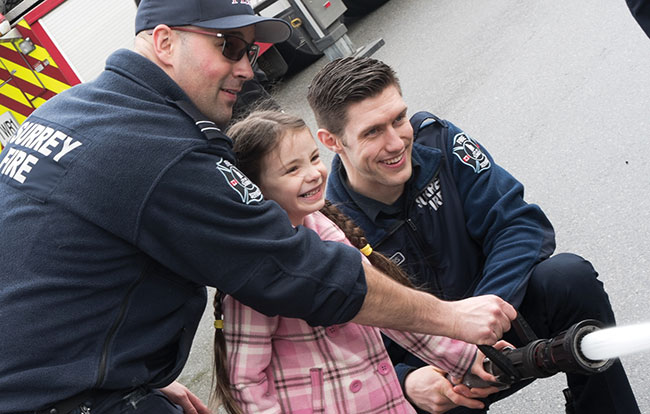 Ben Wilson (left) with his daughter and another Surrey firefighter at a sensory-friendly open house held at a fire hall in Surrey, B.C. Photo: Silvester Law

Editor’s Note: Ben Wilson, captain of fire prevention at the Surrey Fire Service in British Columbia, is the father of a child with autism. He wrote this article in hopes of raising awareness of the issue amongst those in the fire service. Wilson has been developing and delivering autism awareness training to first responders in Western Canada since 2015. He co-founded the First Responder Advisory Committee at the Canucks Autism Network.

Imagine you are responding to a motor vehicle accident. Upon arrival, the driver is unresponsive. Witnesses report that a passenger exited the vehicle and was seen walking down the highway.

You spot the passenger, a 20-something male. He appears to be standing in traffic, waving his hands and rocking back and forth, mumbling to himself. When you ask him if he needs help, he ignores you. You notice blood running freely from a large laceration on his scalp. When you attempt to assist him, he screams and tries to run from the scene.

Autism Spectrum Disorder (ASD), commonly referred to as autism, is a complex neuro developmental disorder characterized by difficulties in social interaction, verbal and nonverbal communication, and restricted and repetitive behaviour. The most recent data from the Public Health Agency of Canada in 2015 shows that one in 66 children are diagnosed with autism.

Here are the statistics:

Autism is an invisible disorder. There aren’t any recognizable physical traits to alert firefighters that a person may have autism. There are many associated disorders that may accompany autism such as seizure disorders, pica, sleeping disorders, sensory processing disorders, and ADD, ODD, ADHD, etc.

The following are some characteristics of autism.

In the fire service, one of our primary functions is patient care. Unfortunately, our foundational training does not provide us with the skills or knowledge to deliver the best care that we can to a person with autism. In fact, it is arguable that our protocols are counterproductive and will likely escalate the behaviours of the individual and negatively impact the outcome of the incident. As firefighters, we need the tools to deliver care while managing the different needs of a person with autism in an effective, efficient, and compassionate manner.

Firefighters should implement the following key strategies when responding to an incident involving a person with autism.

If a person is alone and his or her behaviour is atypical, be on the lookout for the characteristics of autism. Look for a medic alert bracelet or jewelry that is shaped like a puzzle piece, which is the international symbol of autism. Some homes may have a puzzle-shaped sticker on the front to alert firefighters that a person with autism resides in the residence. In motor vehicle incidents you may be able to locate alert information on seatbelts or car seats.

An individual with autism may have an escalated episode as a result of stress related to an emergency incident. The behaviour will be similar to a fight-or-flight response. The individual will try to run away or, if confined, will lash out physically. For firefighters, it is important to monitor and manage the stress level of the patient to prevent an escalated episode from occurring.

Individuals with autism can have under-developed trunk muscles and be subject to positional asphyxiation if left lying face down. This often occurs during police incidents when an individual is handcuffed. During any incident, ensure the individuals who are unconscious or detained are left in the recovery position.

Another great resource is the Big Red Safety Tool Kit developed by the National Autism Association and is available at no cost from www.nationalautismassociation.org. It may be beneficial to keep a copy of this resource on fire apparatus.

April is Autism Awareness Month. Firefighters can engage with the autism organizations in your community, such as the Canucks Autism Network, as the organization may have resources to assist you, or can direct you to an organization that does. Champion autism awareness training in your fire department. We can be better. Engage in dialogue with colleagues about autism. And, organize a fire department open house for persons with autism and dispel the mystery about autism for members in your organization. As an added benefit, familiarization with the local fire department can alleviate a significant amount of stress that a person with autism may experience during an emergency incident.

Ben Wilson has 14 years of experience in the fire service in suppression, training, public education, prevention and investigation. If you have any questions or are interested in providing awareness training about autism to your department, contact Ben at benlwilson@gmail.com.