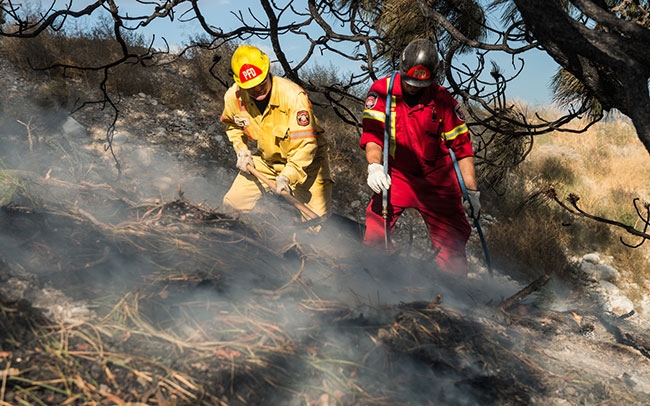 Firefighters working on one of the wildfires in the Okanagan Valley in British Columbia in summer 2018. It was the worst wildfire season in history for the province. New approaches to fighting wildfires are under the microscope

Drones with infrared and thermal sensors, night-vision goggles that enable helicopter pilots to fly at night, and virtual-reality training for firefighters are some of the new approaches to wildland firefighting.

New types of suppressant foams, different types of water delivery systems, and altering land management practices around timber harvesting or the land base itself are also under the microscope.

In British Columbia, for example, which saw its worst wildfire season in history in 2018, experts are looking for and testing new firefighting products, practices and technologies to battle the blazes.

Mike McCulley, senior officer of research and innovation at the B.C. Wildfire Service, said the agency is engaged with independent research agencies and other groups to find creative new approaches to fire suppression – keeping in mind that safety of firefighters and the public remains the priority.

“We know that our fire seasons are becoming longer and more significant,” he said, “so what we need to do as an agency is to try and be more innovative in our approach and be exploring some of these technologies and ideas and research that are out there and, for sure, there’s lots out there.

“Everybody has a passion here to help the situation and come forward, so on that front we are working hard as an agency to look at anything we possibly can to try to help us do our business better.”

In B.C., drones are now being used to fly into and around the perimeter of wildfires that might be well into their lifecycles and map hotspots using infrared scanning so that crews can be sent to specific areas, said McCulley, whereas in the past a firefighter with infrared scanner and helicopter had to be deployed to areas.

“Drones have been used for some time,” he said. “The question is: What else can we do with them? Is there some way we can use them for broader fire mapping?

“Can we perhaps use them for aerial ignition to burn out a fire perimeter? As an attack method, we would use helicopters with drip torches, but perhaps there’s an application for drones.”

“There’s certain products that we use and there’s different types of surfactants that we’re looking at. There’s quite a wide range of them out there on the market and to implement a change to a type of surfactant we’re going to make sure they’re currently better than what we’re using and cost-effective.”

On the innovation front, McCulley said night vision goggles which would permit helicopter pilots to fly over wildfire hotspots in the dark are also being considered.

“We certainly are looking at that. Our provincial aviation specialists are exploring those options right now.”

In addition, he said, land management practices are being closely examined, with an eye to making sure future decisions aren’t creating firefighting hazards.

Meanwhile, said McCulley, the Wildfire Service is also looking into virtual reality training for fire crews. An innovation symposium was being held at the agency’s provincial headquarters in Kamloops, B.C., so vendors could pitch their ideas and let officials know how the technology can be of help.

Some fire departments in B.C. are trying to get a leg up on wildfires by aggressively tackling fuel mitigation efforts.

Training is being conducted, he said, so that they can increase the pace and scale of prescribed burning on municipal and First Nations land.

“This is a much more common situation in the U.S. where municipal structural fire departments are more involved with wildland fire than what we’ve traditionally seen here in B.C.,” explained Gray.

Firefighters working on one of the wildfires in the Okanagan Valley in British Columbia in summer 2018. It was the worst wildfire season in history for the province.

Another method being pitched to fight wildfires in the west is a system promoted by Safeguard, an emergency management company from Fort St. John, B.C. Company owner Jeff Kelly, a trained instructor with the Wildfire Service, said a system of high-pressure sprinklers has been developed that can create a massive and lengthy water curtain to protect communities from wildfires.

Kelly wants communities to figure mass water-curtain deployment into their wildfire response programs, as he believes it will protect and save many western Canadian communities in years to come.

In summer 2018, the Safeguard team was deployed to Fort St. James, B.C., when a wildfire threatened the community. A line of 120 water sprinklers was set up to create a more than 180-metre-wide water curtain between the wildfire and the town, but it was never tested as the fire diminished.

In Ontario, the Ministry of Natural Resources and Forestry is taking a strategic approach to wildfires by using a risk-based or so-called “appropriate response” approach to wildland fire fighting.

The approach basically gives fire managers more flexibility to decide where to limit or allow fires to burn based on the circumstances of each blaze. The previous fire management strategy did accommodate appropriate response, but generally as an exception rather than the rule.

The bottom line of the approach is that fires are treated differently, depending on the circumstances of each.

Natural Resources Canada (NRC), meanwhile, is also focused on getting communities to realize they have a major role to play in reducing the threat of wildfires by encouraging homeowners to use fire-resistant materials in home construction and reducing fuels around communities by creating fire breaks.

The Canadian Forest Service’s Northern Forestry Centre is collaborating with the University of Alberta to examine public perceptions of wildfire risk and factors that influence people taking action.

The NRC states that several factors may prevent people from doing more, such as cost, perceived effectiveness, and feeling that the threat is not great enough to warrant action.