Firefighters should brace for more forest and wildland blazes across Canada in 2019 – and future years – because it will be the new norm. 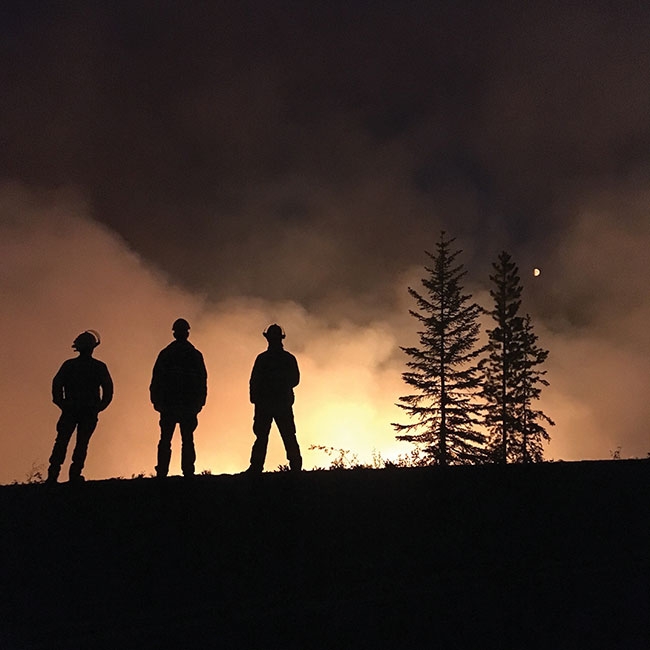 Mike Flannigan, a professor of wildland fire at the University of Alberta, says climate change and a variation in traditional weather patterns is driving the transformation. His research suggests that wildfire intensity has increased significantly in recent years and more extreme fires will only continue.

“It is definitely due to climate change,” he told Fire Fighting in Canada. “Our area burned has doubled since the 70s and I attribute that to human-caused climate change. This is the new normal. It could get worse and worse.

“The bottom line is that, if the models of the future are correct, our fuels will be drier and this is really important because the drier the fuels the easier it is to start a fire, the easier it is for that fire to spread. The more fuel you have the more intensely it burns, so the hotter the fire and the bigger the flames, and the more intense the fire is, the more difficult, if not impossible, it is to put out.”

Flannigan says evidence suggests the jet stream is getting weaker which will lead to more warm, dry areas that are conducive to causing fires.

“Instead of being like a vast river, it’s more like a lazy stream with whirlpools and eddies, and where the ridges are, which is warm, dry air, that’s very conducive to fire. These are big problems for fire.”

Warming temperatures cause a number of problems for the fire service, one being that it extends the wildfire season.

“We’ve seen this in Alberta where, officially, our fire season used to start April 1 and now it’s March 1,” says Flannigan, “so, we’re starting a month earlier than what we used to do in the 1980s.”

A rise in temperatures also results in more lightning strikes, according to Flannigan. Natural Resources Canada (NRC) reports that lightning strikes cause nearly half of all wildland fires in Canada. Studies have also shown that every degree of warming results in a 12-per-cent increase in lightning activity.

“It’s like when you put laundry outside on a hot, dry, windy day,” says Flannigan. “It dries really quickly. As we warm, our forest fuels are drying out.”

The Statistics
Last season was an exceptionally busy year for wildland firefighters in Ontario and British Columbia.

In fact, Ontario experienced one of its busiest fire seasons, with more than 1,300 wildland fires – well above the 10-year average of 723 – burning more than 261,000 hectares. B.C. had its worst year ever, with roughly 2,000 fires burning more than 1.3 million hectares of land.

In Ontario last year, a stubborn fire known as Parry Sound 33 was particularly bothersome due to its proximity to a key rail line and highway. A number of communities near the fire were evacuated as the fire progressed. At one point, the inferno was more than 11,000 hectares in size.

In B.C., a provincial state of emergency was declared at one point. The northwestern part of the province was affected far worse than any other region of B.C. The Coastal region, which covers Metro Vancouver, Vancouver Island and much of the south coast, was also heavily impacted by fire.

Quebec didn’t escape the clutches of fire either. More than 600 firefighters from Saskatchewan, Alberta, New Brunswick, Newfoundland and Labrador, as well as Parks Canada and the states of Massachusetts, New Hampshire and Maine were sent to Quebec to help fight a higher number of fires.

Firefighters surveying the Babine Complex of wildfires near Burns Lake

The Future
So, where’s it all headed?

The NRC estimates that by year 2100 wildfires may claim twice as much forest per year as they do now.

Last year was a bad year, he says, because in 2017 and 2018 it was the first time many of the climate change predicaments and land use practices synchronized.

“In the future, we may see new, novel elements emerge that result in even worse outcomes. None of the science is suggesting the situation is likely to improve.”

Another factor in the mix, says Gray, is that the depth and breadth of the suppression resource pool is shrinking.

“At the height of fires last year, I believe we had a total of 4,000 firefighters available. That’s half of what we typically see in a large project fire in the U.S. We could use a larger pool of skilled and well-trained wildland firefighters in Canada.

“With the direction we are seeing in wildfire behaviour and effects, and new science on human health effects (physical and emotional), we are putting an enormous strain on our firefighters and are losing firefighters more rapidly and not replacing them.”

Going forward, Gray expects more of the same – in other words, extreme fires will be commonplace in Canada.

“We may not have conditions like 2017 and 2018 every year. There will likely be a range of conditions from less extreme to more extreme. Our climate models do suggest, however, that the trend over the next few decades will be toward more extreme than what we just experienced. The trend line, unfortunately, is going up and not down.”

A report from scientists at NASA’s Goddard Institute for Space Studies, indicated that the globe is heating up and that 2018 was +0.77 degrees Celsius warmer than the average baseline temperature, whereas 2016 was +0.79 warmer, and 2015 was +0.80 warmer.

According to a series produced by The Weather Network called Water, Fire, Earth, Air, by year 2030 communities in western Canada will become increasingly strained by dramatically changing wildfire seasons.

The series suggests that fires will be more intense and frequent and more than half of Alberta’s boreal forests could disappear in 80 years due to climate change and wildfires becoming more frequent and intense.

Meanwhile, a study done three years ago by wildfire experts that analyzed the historic and future fire frequency in Canada indicated that fire spread days could increase by 35 days, or 400 per cent, by year 2050, with some of the greatest increases occurring in Alberta and other regions in the Boreal Plains.

Gray says climate change is a worldwide phenomenon and the situation is getting worse around the globe – not just in Canada.

“Global temperatures are rising with some areas experiencing more extremes than others, but overall the picture is not good.”

Merritt Turetsky, an ecologist at the University of Guelph, warns that increased forest fire activity is about to become a regular feature of Canadian summers.

“Fires are now burning larger than they ever have before,” she recently told CTV’s Your Morning. “They’re getting more intense than they have been in the past. This is only projected to get worse.”

Turetsky maintains the science is very clear in that climate change is directly responsible and, although forest fires are a normal part of a strong ecosystem, the increase in forest fire activity and severity could lead to significant consequences for ecosystems.

Turetsky has studied boreal forests in Alaska and the Northwest Territories which burned in major wildfires. In both cases, the forest didn’t bounce back in the way researchers expected.

“Large areas there are simply not re-growing vegetation,” she says.

Flannigan of the University of Alberta expects there will be a lot more fires, possibly up to four or five times as worse, and they will be more disruptive as smoke may affect people in urban areas.

“With climate change, we can throw out the rule book from the past.”

Wildfires have predominantly been a rural problem, says Flannigan, but in recent years, with smoke from fires affecting metropolitan areas, the issue has moved to centre stage.

“It’s now becoming more of an urban issue, so it’s getting more attention.”