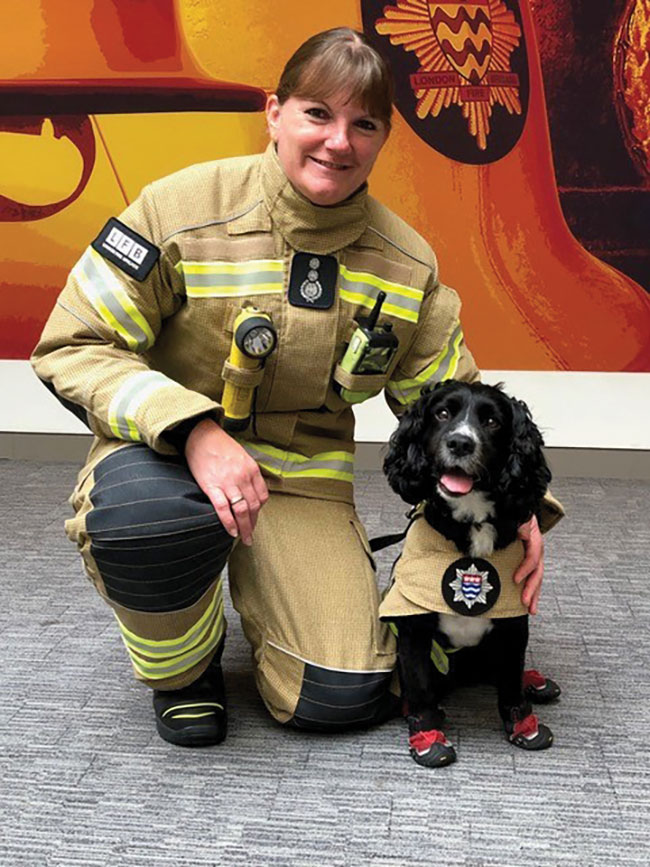 On the morning of December 12, 1988, London Fire Brigade’s Commissioner Dany Cotton, was 19 years old and three months into her career as a firefighter. That was also the morning two commuter trains collided at Clapham Junction, killing 35 people. Commissioner Cotton, then one of only 30 female firefighters in England’s capitol city, responded with her crew to do what firefighters do all over the world. Help make things better.

In her over 30-year career with the service, Commissioner Cotton has seen not only technology change, but also the role of firefighters and the face of firefighting itself change. She has worked tirelessly throughout her career to diversify the fire service using whatever position she was in to promote that mandate. In her role as Commissioner she is unapologetic in demanding change, from simple things such as language (i.e. firefighter vs. fireman), to promoting women’s leadership in the service, and the importance of taking care of your mental health.

As the Keynote speaker at Fire Service Women Ontario’s 2019 Symposium, Dany Cotton will be speaking about Women’s leadership roles in the fire service and leadership in times of crisis.

Commissioner Cotton took some time out to answer some questions relating to her career over the last 30 years as she looks towards retirement.

You attended the Clapham Junction rail crash 3 months into your career. Can you think back to early on in your career and describe how you felt going to your first big event?

When we were dispatched from the Wimbledon station to the Clapham Junction rail crash, there was excitement in the truck. There was an excitement to get there, we knew this was going to be a big event. But when we arrived and could see the trains from the bridge above the tracks, we began to understand that this was real. We saw the chaos of the crash.

Going down the steep embankment I was anxious not to make a mistake. But I started to realize as a firefighter, wearing the uniform, people assumed you know what you are doing and you are going to make things better.

Initially we were tasked with helping injured passengers get off the train and to waiting ambulances. The first person I helped was a man with a broken ankle. I had to get him up that steep embankment I just came down. It was then that I realized this is real life, this is not training, when everything is flat and orchestrated.

After all the injured passengers were removed, we had to start removing the casualties. This is when I asked myself “what if I can’t do this, am I ready for this?” I was fortunate enough to be paired with a nice medic that worked with me under the train to remove the first person, who looked as though they had just fallen asleep.

I realized that day that wearing the uniform gives you a type of protection, you feel you can do more than you thought when you wear the uniform.

Were you the only woman working on that scene?

While I don’t know if I was the only woman at Clapham Junction, I cannot remember seeing any others. It was 1988 and I was 1 of 9000 firefighters at a time when women were told not to talk to other women on the job. This created a lot of hostility and suspicion regarding if we could do the job or not. At Clapham I didn’t cry or run away, which helped me gain some respect.

Can you tell me about winning the Queen’s Fire Service Medal in 2004, how and by whom were you nominated?

Recipients of the award are nominated anonymously and to this day I do not know who nominated me. It was most likely a Senior Member or Chief Officer. Winning the award is a national process, where the committee reviews the nominees and gathers more information before deciding. I was nominated for my work in increasing the diversity of the London Fire Brigade.

At what point did your career begin to diverge from your peers? Why do you believe that was?

From my training squad, none of the guys had gone for promotion when I moved to the position of Station Officer. I even waited longer than I could have. Normally people decide to promote at 4 years, I waited until I had 7 years.

It was never my intention to become Commissioner. I didn’t even want to become a Senior or Printciple Officer, my advancement sort of happened by circumstance. I would see people applying for promotions and think I don’t want to work for that person so I would apply.

When you applied to be Commissioner, what was the vision you presented to the panel that you wanted the London Fire Brigade (LFB) to move toward?

I saw the London Fire Brigade as a place to work on culture. I wanted to see the LFB become a more people focused organization with less target management. Training needed to become more about people being more responsible and more accountable for the changes they wanted to see.

How did being a firefighter best prepare you for being in a leadership role in the fire service? What did it NOT provide you that you had to develop yourself?

Being a firefighter did not prepare me for a leadership role, it was being a woman firefighter that did more so. Because I was a woman I was treated differently, so are managers and officers. Having the experience of being the outsider made me realize that being the outsider in an officer’s position wasn’t going to be easy. A lot of men are anxious about stepping away from the boys’ club. As a woman I was not really in it so I was okay with making the transition.

Being a woman in the fire service teaches personal resilience and if you can put up with those challenges you are halfway to being a leader.

How have you built your internal capacity to cope with pressure/stress as a leader?

From early on I was involved in women’s fire network’s including the Fire Brigade Union and the Women in Fire Service. This provided me with a support group in and outside of the London Fire Brigade. I always had other women to have a conversation with, or just debrief with.

How did you maintain your open and trusting leadership under intense scrutiny after the tragedy at Grenfell Tower?

Even after six hours of interrogation my main was goal was to protect my firefighters. The fact of the matter is, we were not going to solve the problem, the way the fire moved people were not going to get out. Firefighters on scene put their lives on the line over and over again to save people, and it is not fair for arm chair firefighters to say they could do better.

In my career I have never seen or experienced the fear and responsibility that I saw in those firefighters’ faces. They came to work to do their job, and they are being criticized for it.

No one should need to suffer the way the Grenfell community has. The personal impact on so many people is indescribable.

I was most frustrated about not being able to talk about the pride I have in my firefighters.

What were the best strategies developed to protect and bolster the mental health of the London Fire Brigade after Grenfell?

When I walked around the fire ground at 10 a.m. that morning, I witnessed firefighters breaking down into tears. I realized that this event would impact these people for the rest of their lives. I spoke with the mayor as soon as I could and had all the firefighters on scene debriefed with counsellor before they went home that day.

I increased counselling for the service, and accepted help from other fire services to assist. We have done interventions since that time and approximately 1000 staff have had counselling intervention since Grenfell.

Previous management had cut back on counselling services. I have since increased it.

What are the biggest changes you’ve seen in your career in the fire service?

The role of a firefighter is the biggest change. From increased prevention and protection services, education and safe guarding of vulnerable people to using technology such as iPads to safely do auto extrication on modern vehicles.

Of course, the uniform has changed, when I started it was a woolen tunic and plastic leggings with a cork helmet.

The culture is changing. We now have 7%-8% female firefighters.

What are the biggest challenges you see ahead for the fire service as you plan your retirement?

The findings of the internal LFB investigation and Phase 1 of the public investigation into the Grenfell Tower fire will have an impact on the fire service.

What challenges do you see for women in fire leadership positions?

The same issues a lot of organizations have with women in charge; some people have a problem with it. It is really important that we support and promote other women, it is our responsibility.

Women lead differently. Never try to lead like a man because we are not men. We need to keep breaking down barriers.

Mental health still needs to be discussed openly, making it okay and easier to ask for help.

Being a woman in a fire service leadership role is very isolating, so having a network of women is very important.

What challenges do you see for women in city/municipal leadership positions?

I report directly to the mayor and city hall, so it is important to understand the political context of the topics that impact the fire service. Do not be naïve in understanding politics ­— educate yourself. Plan communications carefully, no conversation is ever just a conversation. Know the best way to capitalize on a conversation and balance meetings; be prepared, do your research, and understand what you say and how you are going to say it.