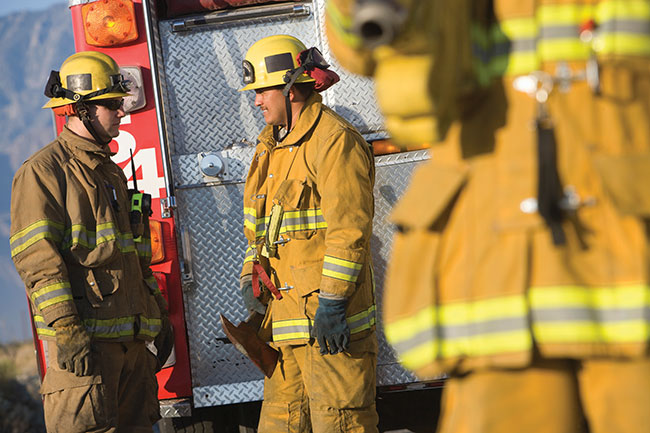 We don’t want to have those tough conversations with others, but that’s one of the job descriptions as a captain. Photo: © moodboard /adobe stock

The more time I spent in the fire service, the more often I found officers starting to trust in my abilities and have me take the lead under their direct supervision. As we were pulling up to a fire or a collision scene with certain captains, we would exchange ideas and initial action plans before we would go to work trying to fix someone’s problem.

I kept doing this, and eventually I wound up in a captain’s position. There I was, in the seat calling shots, and even running the odd scene here and there. I like the idea of being able to throw ideas around with your crew while pulling up to a scene, but at the end of the day, the final decision is yours to make at the crew level on how the task is to be carried out.

With the many types of personalities in the fire service, we all to have to run in and tackle one of the many topics that usually make us squirm – conflict.

It’s that dreaded word that can make the anxiety metre start to quiver, and if you don’t have a game plan as a crew or team leader to tackle it, it can run you over and replay in your brain all day. In my experience, if you leave addressing the conflict to another day, it can make you look like you are aware of it and have refused to deal with it. This can cause that conflict to gain some traction if it’s not addressed. But every situation is different and needs to be treated as such.

I was lucky enough to take a program that unpackaged why we become antsy and cower away from conflict. We don’t want to have those tough conversations with others, but that’s one of the job descriptions as a captain. Whether it’s a personal conflict, or a job performance management item, it is your job to identify it and handle it, depending on your department’s standard operating guideline or policies.

We were packing up after a fire early on in my captaincy and I noticed a piece of expensive equipment laying on the shoulder of the road, covered in mud and requiring some deep cleaning to get back to a ‘service ready’ state.  By doing a quick look around, I identified who I thought was one of our rookies that had walked away from this equipment and neglected to put it away.

My worst fear was leaving it behind and not realizing that we had left it, as well as having to explain to the chief why my crew missed this. I would take the responsibility.

I had a quick chat with my rookie right then and there, away from the other crew members as not to belittle him or make him feel embarrassed for what could be an honest mistake. The rookie stopped me mid-sentence and said, “Sorry cap, that wasn’t mine, but I’ll go get it cleaned up and packed away.”

It was one of my senior crew members on my truck who made the error, and here is where the conversation started to get challenging for me.

I could easily approach a rookie or probationary firefighter and explain the expectations of following through and doing the task correctly, so why was I having an issue bringing this up to another firefighter with a different amount of years?

The answer was simple. I couldn’t use my original conversation plan of ‘expectations’ right off the start.  This senior firefighter obviously knew what was wrong with the situation, but I still had to have the conversation and see what went wrong. That was the approach I took. Did he get sidetracked? Could he have hollered at another firefighter to take it back to the rig and not set it down to perform another task? I explained that piece of expensive equipment needs to be ready for the next call and can’t be overlooked.

Be ready for these tough conversations and don’t go into them too quickly without having a game plan.

Make sure the environment is right and the area is clear from distractions.

We go into almost any fire scene with some sort of a working game plan. Having these tough conversations to make sure your crew keeps their performance and morale level up shouldn’t be any different.

Jason Clark has been a volunteer firefighter in southwestern Ontario since 2007. Having made the transition from firefighter to captain, Jason shares perspective on roles in the fire service and riding in the front seat. Contact Jason at jaceclark71@gmail.com or  @jacejclark.


Related
Fit for duty: Finding your motivation
An Interview with London Fire Brigade’s Commissioner
Between Alarms: Getting hired and getting ahead
Dispatches: Observations from the field