Wildfires are on the rise across the world 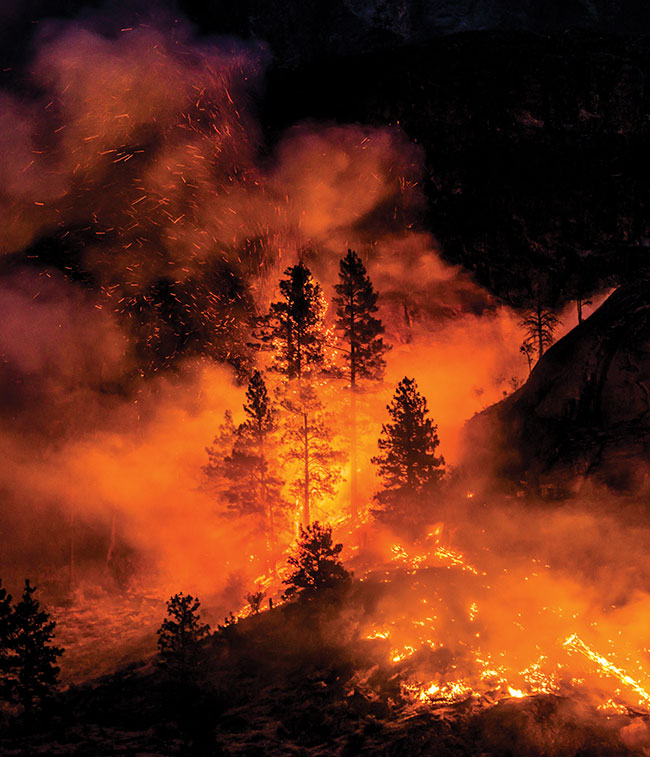 A B.C. wildfire rages on. Around the world, wildfires are happening on every continet except Antarctica. A review of literature on climate change going back nearly a decade found strong agreement that climate change is increasing the likelihood of fires in many regions. Photo: mike biden

Wildfires are growing in intensity and scope across the globe. The full extent of interplaying factors includes the biologically innate, but climate change, land use and population change are significant contributors. By 2100 the number of wildfires could rise by 50 per cent, and governments are unprepared for wildfires that burn for weeks over thousands of square kilometres with the ability to potentially impact millions, says a new report from the United Nations.

The UN Environment Programme and GRID-Arendal released “Spreading Like Wildfire: The Rising Threat of Extraordinary Landscape Fires” in late February. The 126-page rapid response assessment brought together the knowledge of over 50 experts from research institutions, government agencies and international organizations worldwide.

For the purposes of this report, the authors defined wildfire as “an unusual or extraordinary free-burning vegetation fire which may be started maliciously, accidently, or through natural means, that negatively influences social, economic, or environmental values.”

In a review of 116 articles written since 2013 on climate change and fire, the report found there is a robust consensus that climate change is escalating the probability of fires in many regions (Smith et al. 2020). This will also create longer fire seasons. Global warming is creating the hot, dry, windy, conditions that fire events favour. The year 2020 tied 2016 (helped along by El Niño) as the hottest year in recorded history. Vegetation that wouldn’t normally burn, such as rainforests, permafrost and peat swamps, are drying up and going up in flames.  The report found wildfires happening on every continent except Antarctica.

Our planet and our well-being
Wildfires release large amounts of CO2 into the atmosphere, a negative addition to the global carbon cycle that makes it harder to slow rising temperatures. For example, peatlands, which are now burning, store 30 per cent of the total soil carbon globally though they make up only three per cent of the world’s surface. In 2020 in the Artic, home of permafrost peatlands, fires were “responsible for releasing 0.244 Gt CO2 into the atmosphere, which is 35 per cent more than the previous year, which also set records (Witze 2020).”

The tremendous toll on wildlife, biodiversity and vegetation loss seems incalculable and could be expediting extinctions. Out of control fires in Pantanal, the largest tropical wetland in Latin America, wrecked nearly a third of this biodiversity hotspot and there are fears it may never recover, noted the report. There is also the consideration of challenges with water scarcity and pollutants after high severity fires.

Wildfire smoke is quite hazardous to human health. The report referenced a recent study from The Lancet wildfire smoke exposure is linked to more than 30,000 deaths across 43 countries. Firefighters are at particular risk because of their proximity and the strenuous conditions under which they work.

The recommendations
For policy makers, the assessment recommends an audit of all wildfire costs and a rebalancing of the budget to make greater investments in planning, prevention and recovery.

“Countries may consider rebalancing investments by up to one per cent for planning, 32 per cent for prevention, 13 per cent for preparedness, 34 per cent for response, and up to 20 per cent for recovery,” wrote the authors. Sums in Canada on annual national expenditure for wildland fire management were reported to range between $500 million and $1 billion, to the tune of a $120 million increase per decade since the 1970s (Hope et al. 2016; Stocks and Martell 2016).

A second step put forward by the report is to learn from others. Be proactive, share data to improve analysis and forecasting, and gather best practices from others’ experiences around the world. The report notes research shows that the input of Indigenous leaders and women in disaster risk management is critical for solutions that work. Regional and international cooperation was described as one of the biggest potential solutions to lessen the fire risk before occurrence and to rebuild better after.

Building on this is the advocation for a stronger unilateral response through the UN system. Though wildfires are now primarily treated as a national responsibility, the report notes that fires do not respect national borders and the development of an international standard for wildfires would assist international cooperation in wildfire prone regions.

Improving firefighter safety was a key recommendation, taking into account the risks of smoke inhalations, dangerous entrapments like burn-overs, and the overall rest, hydration, and nutrition of the firefighters. The authors also viewed international standards as a way to improve overall firefighter safety.

The report also looked at integrated wildfire management as being holistically key to adapting to the current and prospective outlook for wildfires around the world. This integrated approach “consists of five interlinked and often overlapping phases: review and analysis, risk reduction, readiness, response, and recovery (the 5Rs) (also known as PPPRR: planning and prevention, preparedness, response, and recovery).”

While prescribed/planned burns or other mitigation techniques can lower the intensity of a wildfire in addition to traditional ways of land management that support maintaining values and biodiversity, these techniques are not without risks such as decreased air quality and unintended consequences. The authors recognize and support the “inclusion of Indigenous and traditional fire knowledge within government policy, practice, and programmes can have multiple benefits (e.g., vegetation management, cultural, spiritual, social, economic, health and well-being benefits, and political-self-determination).”

Communities can better prepare for a wildfire by identifying critical assets that need protection, such as hospitals or major transit routes, and knowing their risk factors and possible alternatives if these critical assets are compromised during a wildfire. Evacuation planning and safe shelters are part of living with wildfires. Additionally, the report calls attention to gathering data that can shed light on gender differences because men and women have unique approaches when it comes to come disaster risk perception and decision making. Everyone in the community needs to share a long-term vision of how to live with fire, the report says, and there is an increased need for timely details on wildfire threats. Rapid, effective initial attack is paramount in high-risk regions. This means having trained firefighters at the ready.

Wildfires are a global challenge and developing countries find themselves at an advantage, with countries like Canada and the U.S. having generally well-focused suppression strategies and resources. The report notes that developing countries are less organized, have fewer resources and a major lack of fire detection technologies.

To prevent fires, authors call for a combination of data and science-based monitoring systems with indigenous knowledge and for a stronger regional and international cooperation.

The authors conclude: “We must learn to live with fire.” Time for the world to better manage and mitigate the risks.