A quarter century strong and counting 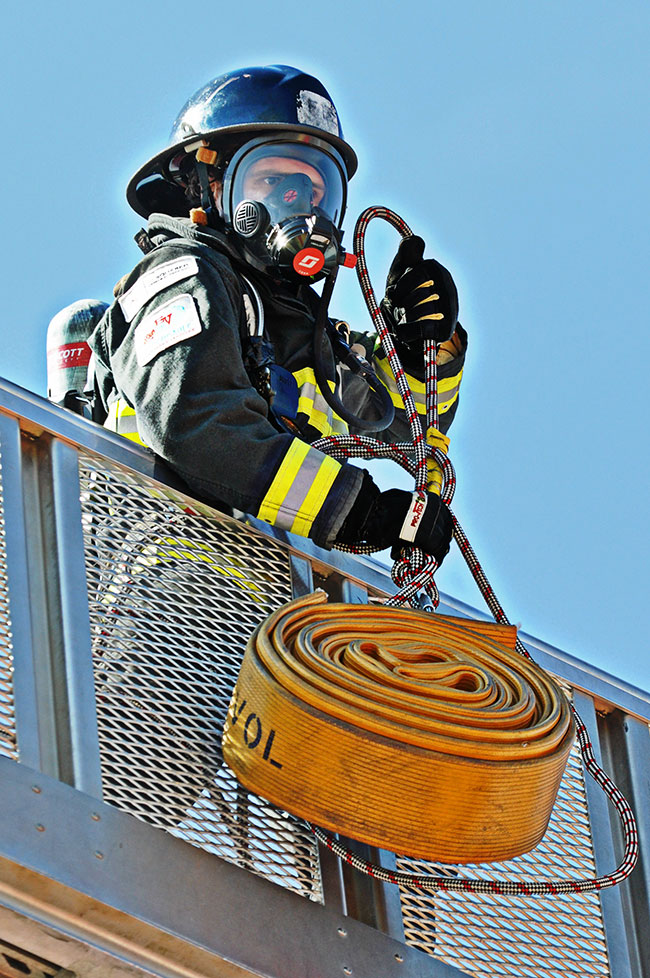 The Hose Hoist simulates getting extra hose up and into a window of a building. Photo: Shawna Coulter

What does javelin throwing have to do with fire fighting? This is the very question Hilary and Dale McRoberts, owners of FireFit of Canada, were asking themselves in 1993 when Dale was a Vancouver firefighter competing in firefighter games that were nonexistent in Canada at the time. Although Dale was very active in and enjoying these beyond the border competitions, this enterprising couple saw an opportunity to bring a firefighter event with fire fighting based tasks to Canada. Armed with vision and a new baby son Connor, the McRoberts worked with Firefighter Combat Challenge to do just that with the original intention of it being perhaps only a one-time thing. The very first Canadian National FireFit Competition was held in conjunction with the Pacific National Exhibition in Vancouver in 1994 and about 50,000 people saw Canada’s firefighter games debut. Fire departments and sponsors were thrilled. In 1995, seven FireFit events were held across Canada that saw over 700 competitors from over 100 departments compete. These early successes sparked an enterprise 26 years strong and counting. Undoubtedly, the McRoberts will enjoy a first-time success again in 2021 when FireFit debuts at Interschutz, a massive international show in Germany encompassing fire and rescue services and civil protection, safety and security.

Even with the best of starts, businesses require tremendous sweat equity and emotional and financial investment. The McRoberts were no exception, with the young family traveling extensively and even taking a second mortgage on their house to build and grow the circuit, which has 12 event slated for 2020. Sometimes, Hilary said, they wondered what they had gotten themselves into.

“We made some big sacrifices because we felt that this was something that was really relevant and necessary for the fire service in Canada, so it been a labour of love…Our son has grown up with it – this past year was probably the first time he’s had a birthday at home in about 25 years. We are very much like circus people, for lack of a better way of explaining it.”

The McRoberts poured their funds into FireFit, eventually having a hydraulic tower built that goes up in 10 minutes, which was a big improvement over the hand-hewn scaffolding that took a whole day to take down. The family has friends coast to coast and son Connor plays a key role in event operations. It’s a family business through and through.

All the hard work continues to pay off with the expansion of FireFit onto the world stage at Interschutz in 2021 (Interschutz was previously scheduled for June of this year, but was postponed to 2021 due to COVID-19). Previously, the McRoberts allowed some organizations to hold FireFit events in Europe and this caught the eye of the Interschutz organizers, said Hilary. Interschutz offers massive exposure for FireFit. The show boasts 157,000 visitors and over 1500 exhibitors with over 50 per cent being international. The show sees representation from over 50 countries and features 178,000 square metres of show floor. The 2021 show will be the first time Interschutz attendees will see firefighters from around the world compete in the FireFit Championships. The course and concept will be the same as it is in Canada, said Hilary. The measurements will be the same but the tower will be a little bit different as FireFit can’t take their tower there, but it will be similar. There are six fire fighting tasks in the games. First, firefighters will tackle the Stair Climb by racing up a HAIX stair tower in full turnout carrying a 19 kg high-rise hose pack. Once at the top, competitors take on the Hose Hoist and haul another hose pack up from the ground on a rope. Once this is completed, firefighters face the Forcible Entry simulation using a chopping simulator. The fourth challenge is the Run, featuring a slalom course and challenging contestants to drag a charged fire hose over a set distance. The Hose Advance has shouldering a 1 3/4 inch fully charged hoseline and dragging it 75 feet as part of its task. The final challenge is the Victim Rescue, which involves moving an 80 kg dummy over a specific distance. The championships are made up of individual, tandem, and relay events for teams of three and five competitors. For the Interschutz event, there will be European title winners and world title winners.

To say there was interest from firefighters is an understatement – McRoberts said registration basically filled up the same day it opened. The scope of registered participants is definitely international, but they all share a passion.

“They all have the same mindset where they want to be better,” said Hilary. “They want to do their job better. They want to maintain their fitness, which is super important in fire fighting. This gives them a goal to do that.”

Eager spectators on the home front will most likely have to wait for video footage post-Interschutz to be posted on FireFit’s YouTube channel, but snippets will be making the rounds on social media during the event. In Canada, FireFit has aired on TSN, OLN and RDS.

The McRoberts have been holding a FireFit world championships in cahoots with its national championships, and now the family is bringing FireFit further into the international spotlight. The debut at Interschutz will also be a boon to FireFit’s sponsors, many of which have been with the McRoberts since the beginning.

Expansion seems to be the theme of FireFit’s quarter century turn. The McRoberts recently introduced PoliceFit and MedicFit. The PoliceFit Championships is very similar to FireFit in that is based on regular line-of-duty tasks and requires around the same level of fitness. The PoliceFit challenge will happen on the same competition course as FireFit, which takes advantage of existing safety protocols for contestants. MedicFit follows a similar model in being designed to showcase the skills of the group through task-based challenges. The company is starting with PoliceFit, which will have several events running in tandem with FireFit for 2020, and working towards ramping up MedicFit. Scheduling this trifecta is an ongoing challenge for the McRoberts with the finite number of seasonal weekends in Canada.

“Eventually, we would want to incorporate police, fire and medic all into one. We think it’s very important to bring those entities all together,” said Hilary.

The games are spectator sports as well, and McRoberts noted that for the police in particular, participation is a nice way for this group – who can take a lot of flak as the issuer of speeding tickets – to have positive interactions with the public and build rapport.

FireFit of Canada has evolved from a one-time success to quarter century success story. In retrospect, javelin throwing turned out to have a lot to do with fire fighting. It served as a catalyst for Canada’s own fire fighting games.

Related
Understanding autism
Fit for duty: Finding your motivation
An Interview with London Fire Brigade’s Commissioner
Back to basics: Be a sweeper, not a patter